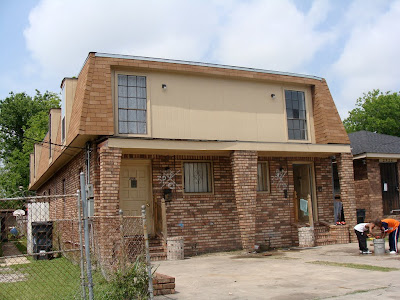 Here's another from New Orleans, courtesy of Karen Gadbois at Squandered Heritage.
I've never seen another mansard with inverted columns and frosted glass windows.
Posted by kristan at 5:10 PM No comments: 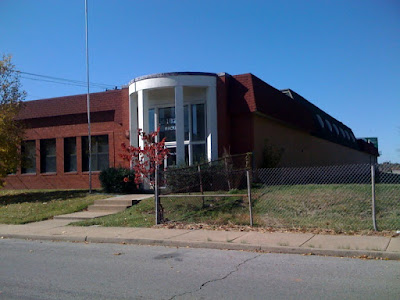 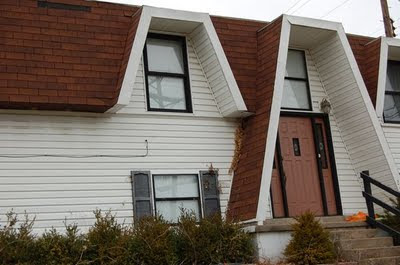 How bout them Italians? The Hill is best know for its cute shot-gun homes, St. Ambrose and great food. I am adding another feature: strong-armed architectural smushing. Here at the corner of Macklind and 44 we see a hybrid post-modern Greek Revival entry with a French 2nd Empire roofline. Reminds me of the original bad mansard on Brannon, also on the Hill, a frankenstyle of Swiss chalet, split-level modern and 2nd empire wannabe mansard.
Posted by kristan at 9:49 PM 1 comment:

Mansards as far as les yeux can see 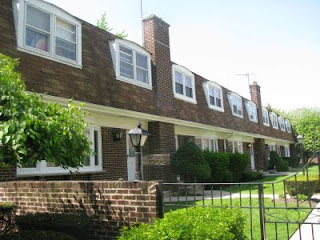 More from Chicago in Rogers Park, Hamilton Avenue.
Posted by kristan at 9:46 PM No comments:

Can't get there from here 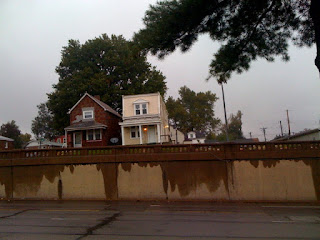 This lovely is perched above Chippewa near Meramec. Someone please tell me how I can actually get up to the street upon which this house sits. I've been trying for months- Help me southsiders!
Hard to see from the distance of the custom wheels parking lot, but this mansard is a small two-story covered in jaune vinyl siding.
Posted by kristan at 10:48 PM 4 comments:

Certainly there is a mot Allemand 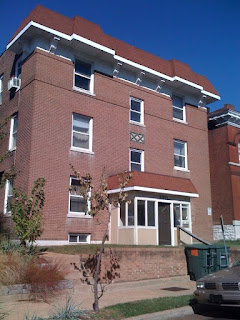 I suspect there is a German word for "multifamily unit I see everyday but never noticed its bad mansard top."  Or a yiddish word.
This is on Castleman and I've been driving past it almost daily for six years.  Just now noticed its top.  And its bonus mansarded entry vestibule.
Posted by kristan at 1:44 PM 1 comment: 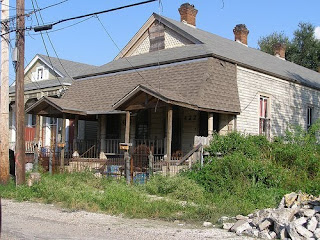 Mes amies de Saint Louis!  Jump on a bateau and let's paddle down the Mississippi to visit New Orleans.  Thanks to Karen Gadbois who provided me with bad mansard pix around New Orleans.  She writes a great blog Squandered Heritage, CLICK HERE, about New Orlean's architecture and the struggles of post-Katrina rehabilitation and demolition.
Karen labeled this home 'mansard with wings.'  A perfect description.  This house is the bulky maxipad of architecture.  I'm not sure there's another house like this anywhere in America.
Posted by kristan at 11:16 PM 1 comment: 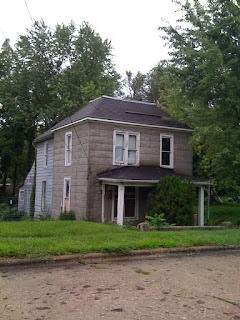 Another from the Lost Mansards of Downtown Hannibal series.  Is that permastone on the facade?  I suspect there's a cute little house hidden under there.
So I was talking to some Hannibal folks about the struggling state of its historic housing.  My sources tell me there just aren't enough people with the money and good taste to properly rehab downtown Hannibal.  To which I blurted out, "don't you have any gay guys?"   Evidently not.
I told my source not to lose hope in beautiful little Hannibal.  St. Louis almost gave up on Soulard and Lafayette Square 35 years ago.  Look at these neighborhoods now, rehabbed one sad mansard at a time.
Posted by kristan at 9:36 PM 1 comment: