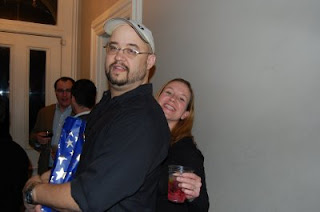 Our annual Mardi Gras party really has nothing to do with bad mansards other than the fact we live in a good mansard neighborhood in a lovely mansard house. Soulard goes into a frenzy for Mardi Gras with a giant, obnoxious street closing parade on the Saturday before Mardi Gras.
According to urban legend, "it's the biggest American Mardi Gras outside of New Orleans;" that may be true, or another of those urban party legends such as "I heard Animal House was based on [insert fraternity name here]" or "Mizzou was such a party school that Playboy listed it as a professional." We have our party the Friday night before the Grande Parade, the same night as the Mayor's Ball and the Preservation Hall Jazz performance at Powell.
This year's party turned out well. 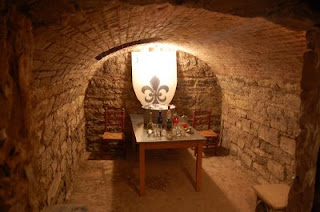 The theme was Busch Bavarian cellar (I tricked out our beer cave in Busch). Bavarian Cellar really wasn't much of a stretch. The German that built this house was Bavarian and likely kept his beer in the cellar. Here's a recap, as much for my party planning purposes for next year as for your amusement.
Invitations: I used electronic invitations this year- very unlike me. I went through mypunchbowl.com. Loved it. Helped me keep my numbers straight and will give me a head start for next year. We sent about 120 invitations. That does seem like a lot, but it is Mardi Gras so people wander in and out all night going to other balls and parties. About 130 people came through.
Near misses:
Help: I hired a coat check girl and a bartender. Money well spent. We put the bar in the first floor spare bed room. We left the beer on the back porch and in the shower on ice.
Liquor: Booze were available in the cellar, playroom and laundry room. We consumed 60 Busch cans, 60 Budweiser's, 40 Bud Selects, 30 Bud Lights and about 30 Schlafly's. Lots of red wine (12 bottles) and almost no white wine (just 2). 4 bottles of bourbon (2 Makers Mark, 2 Jim Beam), 1/2 Glenmorangie Scotch, 6 bottles of vodka (including 2 pomegranate). Next year: more tonic, less club. I'll tell you what people don't drink: GIN. I think too many of my friends snuck it from their parents in the 1980's and can no longer stomach it.
Non-alcoholic: surprisingly, only about 5 units of NA soda, juice, etc. Target/Market Panty blood orange soda was a big hit. 2 pots of coffee. 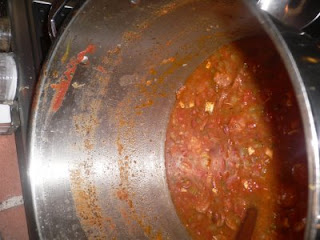 Food: I made a f-load of Red Beans and Rice using andouille from G&W, no seafood because it's too expensive and too easy to overcook. Made 18Qt., which was 6 QT. too many. Rice: OVERMADE. Next year cook about 18 cups of rice at most. Poor Scout the dog has been eating rice for a week.
Appetizers: aimed for liquor absorbing junk
party food. Big hits were chicken wing dip, Reuben dip, and massive platter o' taco dip. Also quickly ran out of friend Eli's crab cakes and andouille inhalers. My baby cupcakes were a big hit.
Party flow: you never know where people will congregate. I've long lamented that no one hangs out in our front formal parlor. Not this year damnit. People went to my parlor. I put the couch on a diagonal which i think made the room more welcoming. Guests spent a lot of time in the parlor, kitchen and front hall. Basement and cellar had good crowd. No one went in the TV room, which people usually cram in to. I moved the dining table against the wall so the dining room was big and open. Kids, by the way, don't want me to change it back. It's a wrestle mania dream come true. 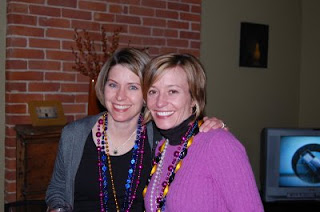 Time: Party started at 6:30. First guests arrived at 7:00. Many people cleared o
ut at 12:00; another group left at 1:30. TIme at which I lost track of guests/food/topics of conversation because I'd overserved myself: 10:00.
Best hostess gift: bottle of vanilla. Not vanilla vodka, just pure vanilla extract.
Posted by kristan at 10:29 PM 2 comments: 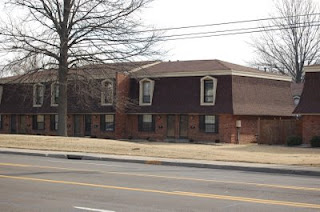 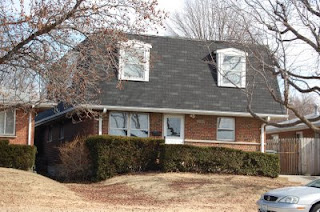 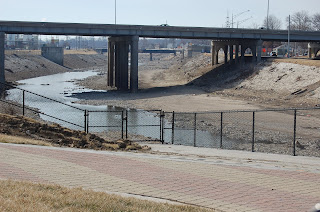 Here's a mansard along one of  St. Louis' lesser known rivers, the River des Peres.  No, French speakers, it's not the Day Per-rez, but the River Duh Pear.  And the River des Peres (RDP) isn't really a river, but a storm sewer overflow.   The RDP winds though the City of St. Louis and picks up water from storm sewers and creeks along the way before dumping into the Mississippi River about 1/2 mile from where this photo was taken.  It's low and dry now, but the RDP swelled to its top earlier this spring.  Each side of the RDP pays tribute to one of St. Louis' important cultural identities:  The north side is Germania (German) and the south side is Carondelet (Ca-RON-duh-lay, French).
Posted by kristan at 12:01 AM 1 comment:

Highway 55 and Union: where mansards go to breed 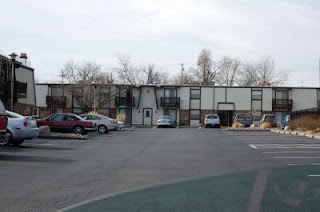 There's something about highway development that makes bad mansards multiply.   Here is not just one lone mansard, but an entire complex of bad mansards much in the style of the triple threat mansard featured in the header of this blog.  Triple threat=swiss chalet, split level, mansard.  Ironically, Jennifer Lopez just celebrated the one year birthday of her twins.  It's as if my original bad mansard on Brannon finally gave birth to fifty awkward bad mansardettes. 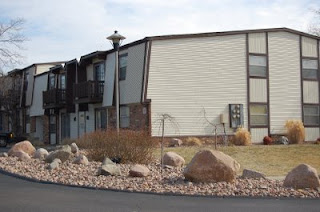 Posted by kristan at 9:08 PM No comments: 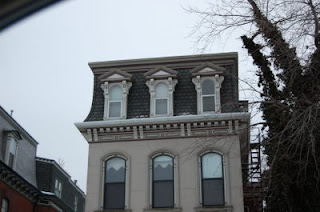 This lovely mansard belongs to my bonne amie J.P.W. and her husband W.  It's about as perfect as a mansard as you'll find anywhere.   I met J+W when our oldest children were infants in the Lafayette Square ad hoc playgroup.  Lafayette Square is crawling with kids now, but back in 2001, there weren't very many of us.  Anyway, for as long as I've known J. she's been doing up her mansard avec some serious skill.  This is her 3rd floor roofline-  check out that detail!  I don't know what the curly-cues are officially called, but they sure are pur-ty.
I also like the restraint she has shown with her paint colors.  Unlike some other houses in Lafayette Square, J's paint colors are tasteful and restrained.  Note to crazy paint people in Lafayette SQ:  don't take the painted lady designation so literally.  Painted lady does not mean crazy Pantone experimental freak-fest.
Ironically, J's sister teaches French and I should hope she never proofreads my French (as I would hope Madam Mason of WGHS or Madam Muratore at Mizzou never track me down either).
Posted by kristan at 10:28 PM No comments: 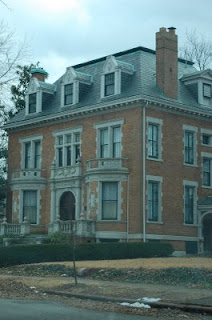 This mansard makes me drool.  It's on Hawthorne in Compton Heights and combines two of my favorite elements-- Compton Heights and mansard roof.  I think Compton Heights is the most beautiful neighborhood in St. Louis city.  Don't get me wrong- Lafayette Square and the Central West End are lovely architectural gems.  Compton Heights, however, is where I dream of living one day.  I love the houses, the people, the wide streets and the fact I wouldn't have to change zip codes if I moved there.
Posted by kristan at 2:26 AM No comments:

Near the intersection of "Bad" and "Mansard" 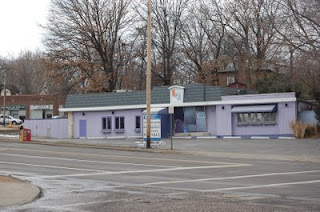 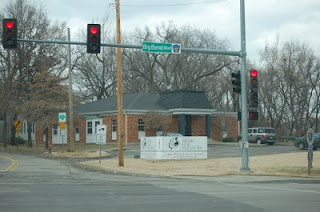 Here are two commercial mansards at the intersection of Big Bend and Shrewsbury. Not sure if these are technically the municipality Webster or Shrewsbury.  Two bad mansards at one intersection!  The purple building is the former restaurant Zinnia's, which had pretty decent food but recently closed.  I think the owner was tired of running a restaurant.  I think the career of restauranteer would indeed suck the life out of you.
The combination purple paint/bad mansard was almost chic in the 1980's when Zinnia's opened.  In the 1990's it was quirky.  By the 2000's, the paint was faded, the mansard was shabby and Zinnia had lost its buzz.   The combination of the purple/bad mansard was old and sad, much like an 38 year old chubby girl lifting her shirt at Mardi Gras.
No idea what the other bad mansard houses- a music place?  It's been there forever.  I passed it a thousand times driving up Big Bend on my way to Deer Creek Liquor ("bottle of Dimitrov vodka please") and Naugle's ("hey guys, after the show we're all going to Naugles").  Deer Creek is closed, no one makes Dimitrov and I think Naugles is a Quizno's or something.  I am so old.  Just like the purple mansard, but come Mardi Gras I get the hell out of Soulard and I'll lift my shirt for no one.
Posted by kristan at 4:20 PM 2 comments: