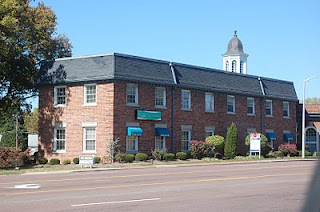 New category- St. Louis landmarks with bad mansard roofs. Here is Hans Weiman, where men (and women) can get their hairs restored. I think Hans may have moved locations from this location on Brentwood Blvd. But, in my mind this will always be Hans Weiman.
Funny story. Stop reading if you're not into inside jokes that happened 20 years ago in Webster Groves. I used to work at the WG pool. There was an intercom/PA system. The pool staff had a great time making up fake pages for others. For instance, after a lifeguard fell and skinned his knee, "Mr. Garth [pool mgr], Terry Crouppen of the law firm of Brown and Crouppen on the phone for you."
There are two guys. Jeff K. is my husband's boss but my old coworker. Bo K. is also a family friend. Poor Bo K, who was quite handsome, was teased for his hairline. Mind you, he wasn't bald nor did he even really even have thinning hair. But, his hockey nickname was Smoothie for his 'smooth' head of hair. Thus, the page to the hundreds of people at the WG pool by Jeff K to Bo K: "Bo, Hans Weiman on the phone for you. Your hairpiece is ready for pickup."
Posted by kristan at 2:02 PM No comments:

Did the early 1990's bar scene nurture my love of the 2nd Empire mansard roof? 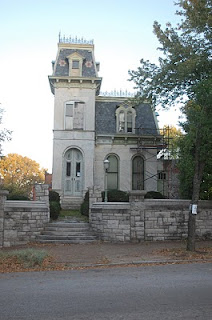 It's been a while since I've featured a pretty mansard. This cute house a reminder of what a proper mansard roof should look like. J'adore wrought iron cresting and thus I've always had a crush on this house. I remember it from when me and my party people would come to McGurks during college breaks. We'd look for parking and I'd always say, "I love that house." Of course, now I live a few blocks from this house. Coincidence? Or destiny?
I've added a new tag: pretty 2nd Empire houses near bars where I went 20 or so years ago.
this house---Soulard---McGurks
houses on Park Ave----Lafayette Square---Killabrews
houses on Sidney Street----Benton Park----Cats Meow and Sidney Street
Posted by kristan at 11:45 PM No comments:

Labels: good mansard, Pretty 2nd Empire houses near bars where I went 20 or so years ago, soulard 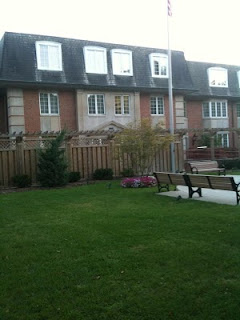 Another mansard retirement home for you, this time in Evanston, IL. My Evanston man-on-the-street Dan Consiglio sent it. He wonders if it is called Mansard Arms.
Posted by kristan at 10:12 PM 1 comment:

Not a mansard, just bad 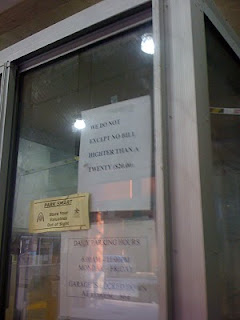 Here is some signage seen throughout the City of St. Louis parking garage at 7th and Pine. It reads, "We do not except no bill highter than a twenty." [sic] Yes. Someone wrote, printed, copied and and posted this message many times despite multiple errors- "no bill", highter and except.
There are approximately 4 people who work in this garage. The booth attendant read books and talks on the phone. The other three play solitaire in the office on the computers and smoke. They don't watch the garage or monitor the security cameras. How do I know? Because cars in this garage get broken into all the time. I am convinced it's an inside job, or at the very least, someone letting a friend enter the garage and break into cars.
I am usually very proud of the work performed by the various departments in the city. I think forestry, streets, parks and refuse do a great job. I love the Citizen's Service Bureau. I think the courts are well run, as is Gregory FX Daly's Office (Collector of Revenue) and Sharon Quigley Carpenter's Office (Recorder of Deeds). I am madly in love with the nice guy who answer the phone in the water department.
But this garage is a joke and an embarrassment. The staff is lazy, rude and likely criminal. And my tax dollars pay four people to sit around and do close to NOTHING all day, except print signs without using spell check.
I think I am going to report the spelling and grammar errors to Citizen's Service Bureau.
addendum: I am also bothered by the notice that the garage will be "locked down". First, that's a lie. Second, what is this, prison?
Posted by kristan at 10:11 PM 4 comments:

Does the mansard even matter? 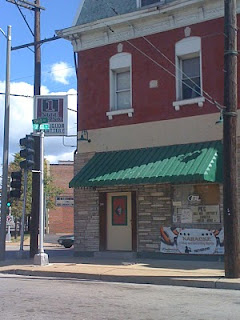 Here at on Gravois at Ohio is the 1 Night Stand. One stop shopping for:
Posted by kristan at 12:14 AM 2 comments: