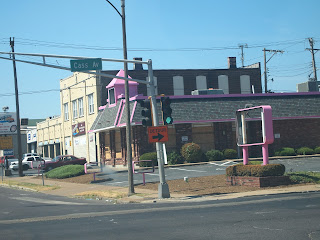 Since October features a lot of pink for breast cancer awareness, I present to you a pink trimmed bad mansard on the near north side.

October is a month of crazy parties, school events, neighborhood events, festivals, Halloween, birthdays, soccer, volleyball and camping.  I have been tired, over committed and frequently hungover.  But at least I can see the end in sight.

November will be  my purifying month- I will clean my mind, body and house.  Exercise, church, clean eating, clean the house,  etc.  And I will clean up bad mansard starting with the overly large header pic and getting some good pics.
Posted by kristan at 11:50 PM No comments: 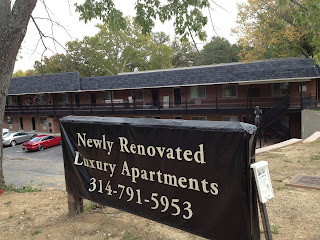 Last week I did a little self improvement.  I took care of some doctors' appointments.  Got my hair cut and told my stylist to go blonder with the highlights.  Used my vision insurance to buy some new glasses and wound up selecting purple cat eyed frames.  Learned to shoot a gun.

As I left the vision center I saw one of my favorite mansard apartment buildings in Webster Groves has a bit of an upgrayedd.*  Looks likes a newly renovated luxury apartment with a new bad mansard roof!

*points if you can name the "upgrayedd" movie. 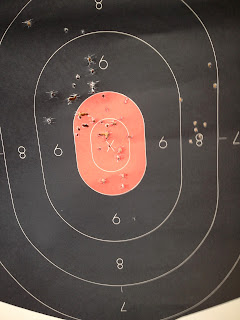 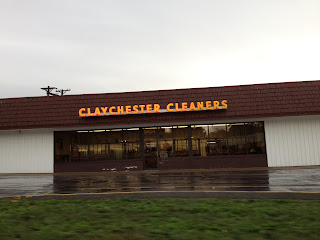 Those were fun times for me.  Holidays at their house was all about beer, white tableclothes, Blue Nun wine and laughter. It was always a fun, loud time at my grandparents.  But looking back I realized now it was a very hard time for my grandparents.  My grandfather was a marketing exec for Falstaff beer and lost his job around 1975 when operations collapsed.  Click here for the full story:  FALSTAFF    He and my grandmother had to sell their house in Kirkwood and downsize to an apartment.  Not long thereafter my grandfather was diagnosed with bone cancer and died.  Very sad.
Posted by kristan at 10:42 PM No comments: 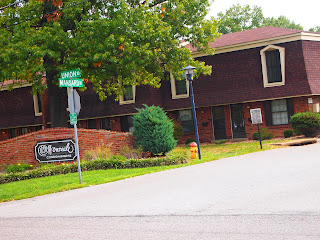 At the corner of Mansard and Union Road sits the mecca of bad mansards.  The street is called Mansard.  And- the kicker- the whole place is named the Monreale Condominiums.
Come now- tout ensemble- avec your best accent Francais, dit "mon-ree- all."

Where to find such a classy place?  The intersection of Union and Reavis Barracks Road in south county, of couse, right behind the Shell Station.


Looks like the place has been spruced up a bit.  Roofs are updated and there is a companion mini-mansard in each back yard which is evidently the place to stick your satellite dish.

I find myself at 55/Reavis more often than I care to admit.  6th grade girl's soccer.  Out little city team has been placed in the south county team because there were only TWO teams of 6th grade CYC teams in the "open" division (meaning the team has club soccer players).  And there was only ONE city team in the "closed" division (no select players).  So instead of having a city league of just 3 teams, the CYC put us in south county.

Let's do the math.  That means there are only, at most, SIXTY or so sixth grade girls in the entire City of St. Louis who are playing CYC soccer.  Disclaimer- St. Roch plays in a county league so they probably have 20 or so playing too.  But still.  The numbers are screwed up. And sad because it's not just soccer.  It's basketball and softball and volleyball too.  Disappointing trend.  No one wants to be on a team anymore.  And I sure do hope the thousands of other sixth grade girls are doing something for exercise.

CYC divisions are supposed to be changing in Spring 2013.  There won't be a city division any more.  We will either merge with the South Central division (Mary Queen, Holy Redeemer, etc) or with South County.  So looks like I'll be driving either 44 or 55 a lot more to get to games.    And I hope I find some mansards along the way. 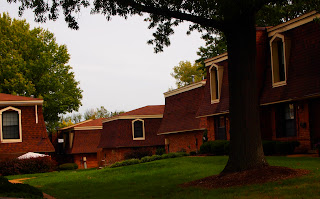