The lasest installment of the "on the way to volleyball"  mansards of South County, this one on Mehl road.  I suspect this Mehl is behind the municipal name of Mehlville.  In other exciting news, I went to the PetSmart and Sports Authority on Lemay Ferry just minutes after this photo was taken. 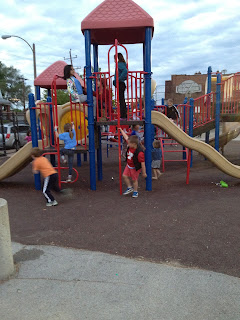 Pinballing is the only word I can come up with to describe this weekend. You know those periods where time simply does not belong to you bouncing along from one event to the next?  Where there is so much to do and so many places to go that nothing on the to-do list gets done.  For instance, I wrote "get poop off bathroom wall" and it's 12:09 on Sunday night and I still haven't gotten it done.

Statistics:  Friday school volunteer, kindergarten parent lunch, volleyball clinic, lacrosse game, football game, karate class, 5 (yes, 5) soccer games, hockey learn to play, Girl Scout April Showers (shoot me now), church with John's parents, brunch, science fair project, reading project and a birthday party.  It's the by-product of 4 kids.  Each of them does one-two things and suddenly you're driving around all weekend.  And I would add that I am driving around with a "check maintenance" light so there goes another thing onto the to-do list.

Two great finds:  at the soccer games we saw the new playground surface at Epiphany.  It's that nice spongy surface now.  Gone are the horrid little pebbles.  Raise your hand if you've ever gone to Epiphany and had a kid 1.  lose something in the pebbles or 2.  Come home so filthy that a black ring developed in the bathtub.

And the birthday party.  I muttered to myself as we walked in that we should have skipped it.  Too much going on.  But for little Mimi about whom the weekend does not evolve around, it was the most awesome thing ever.  Poor kid had never been to the baby pool at the Carondelet YMCA.   In fact, I seriously doubt she's even spent that much time in a baby pool, let alone one with a slide.  We just don't do that thing much anymore.  Our pool doesn't have one and I cannot think of the last time I took the anyone to a baby pool.  Her joyful shriek was so cute and she did that slide no fewer than 50 times.

Now I feel guilty.  How much else has child #4 missed?  Did I somehow also forget to take her to the zoo, or to the Magic House (no, but you get the point).   One thing I didn't forget was to check the boxes of her sisters' old clothes for a swimsuit.  Pretty cute for a hand-me-down dating to 2005. 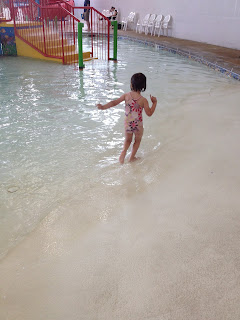 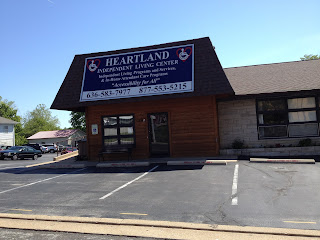 Frequently for my job I am dispatched to the outstate of Missouri.  Thursday was Union.  I combed the downtown area for bad mansards and this permastone log cabin mansard was all I could find.  Sorry for the shadows on the picture.  I have asked for a decent point and click camera for Mother's Day so I am hopeful the photo quality will improve.

I don't know much about signage, city code and the like, but I am quite sure this size sign exceeds most design and zoning guidelines for proper sign size and placement.

If "Heartland" is a bad sign, the Budweiser lettering at the brewery is a good one.  It's also big but proportional to the size of the brewery.

I took the picture while jogging with the dog around the Anheuser Busch brewery which I consider a good substitution for a park.  It has a 1.25 mile perimeter, no cross streets to worry about (other than the entrance gates), security, even sidewalks and landscaping.  If you cross Broadway you can add some miles by looping Lyon Park (or Rollercoaster park as my kids call it due to the hills).

I'm not the only Soulardois running around the brewery.  On any given evening there are many of us circling the brewery.  Hey, in Soulard we take what we can get.  Some city folk have lovely parks like Lafayette and Tower Grove and Francis for exercise, we make due with our beer brewery. 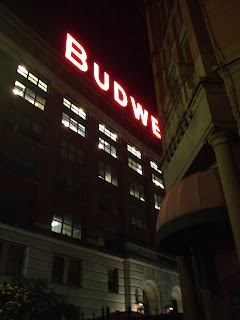 I am a mère du football 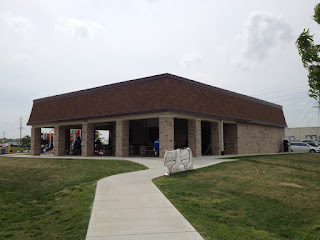 I never thought I'd be one of those moms packing up the family to head off to some out of town sport tournament. Yet here I am in Cape Girardeau for my 11 year old's soccer tournament. At least I found a bad mansard picnic pavilion in Cape's Shawnee Park.
I struggle with the amount of time I have on my hands. I am not used to free time. So far we've been to Target in between games and did our "big" Target shopping. I plan to needlepoint, catch up on email, read and go to bed early after a couple of beers. My two charges (the soccer kid and her 9 year old sister) are running around the hotel and swimming.
My husband remains at home with the 6 year old boy and 3 year old girl. Everyone is having fun. It's good to mix up the household dynamic every once in a while, and also good to try a new Target every once in a while.
Posted by kristan at 3:18 PM No comments: 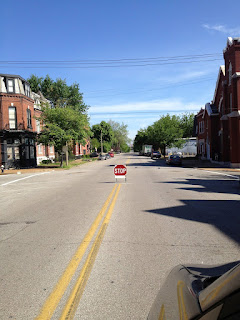 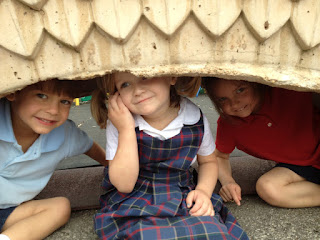 A few weeks ago the city removed a stop sign at the intersection of 12th and Victor. I have no idea why. I think I saw a car counting box on Victor (is that what it's called? one of those strips attached to a box where you drive over it and it counts cars). I doubt many CARS come across 12th/ Victor right there. But lots of PEOPLE use that intersection which is not surprising considering there is a church, school, grocery store and cluster of businesses on the block.
Clearly the south Soulardians complained and we got our stop sign back. I must not have been the only one complaining. I called citizen's service bureau at 9 am and that same morning the temp stop sign went in. I really, really doubt the city's street department is that fast.
In my continuing theme of city kid pictures, here is my youngest Mimi underneath her school's dragon sculpture (a Bob Cassilly original). She's in the middle. Her friends are two of a set of triplets and the boys look almost identical although she is certain the boy is O.
Posted by kristan at 7:10 PM 2 comments: