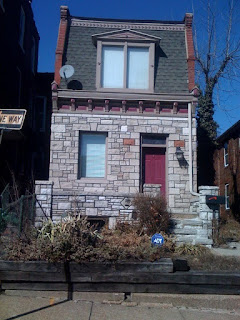 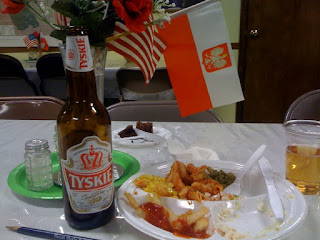 In the shadow of the Anheuser-Busch brewery is a permastoned, purple-doored, satellite-dished nast-tard.
This place is wedged between the brewery and St. Agatha church. St. Agatha was an old German parish, then it was Latin Mass and now it's the temporary Polish parish. Took the kids to the Polish fish fry- good fish, strong beer.
Posted by kristan at 11:16 PM No comments: 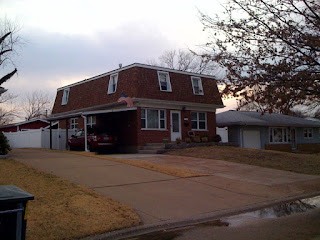 Another mansard offering from the finest boulevard de St. Louis, le Rivre de Peres. The title, en francais, is supposed to translate to "prim nor proper." I depended on Babelfish for this translation (most of the French I utilize in badmansard is from my brain, dating back to 7 years of high school/college French). I hope babelfish got this correct. The translation seems a little long just to say prim nor proper.
Guess what street? Primm! get it?!? Primm nor proper?
Posted by kristan at 10:46 PM No comments:

This has nothing to do with mansards but rather phone number prefixes. When my family moved from Indianapolis to St. Louis in 1975, we lived in Brentwood and got a 962-XXXX phone number. I won't tell you the number because my mom still has the number at her house in Webster. My husband John also grew up in Glendale with a 962 number. His parents in Shrewsbury still have that number.
I suspect phone number fate brought John and I together. Our childhood numbers were only 2 digits different and we didn't live but a couple of miles from each other. I wonder: did I ever call him by accident in the 1970's? Did our paths cross at the Carl's Drive-in or the crappy Rock Hill McDonald's? Did we try on Dickies at the same time at Rudolph's? Perhaps we crossed paths at Goldies or Lauries.
Everyone's number in Webster/Brentwood/Rock Hill was 961, 962 and 968. There was no 918 or 963 prefix. Those are 'new' numbers (even though they've been around since the late 1980's) and the 961, 962 and 968 numbers are still preferred. 962, clearly, is the best.
As a kid and teen (and even still today), when someone tells me their phone number I only remember the 1, 2 or 8 and then the other 4 digits.
Here's my point. I live in south city now. I've swapped out the 962 for a 776. And now I have to think about 771, 772, etc. Same principle- remember the 1, 2 or 6. And now I'm a little snotty when someone has a 'new' prefix.
I was really mad to lose my 621-XXXX number when we moved from Lafayette Square to Soulard. Evidently we were just a little too far south to keep it. That was a great phone number.
We've had the 776 number since 2002 but credit collectors still call almost daily looking for some dude named James Thomas.
Posted by kristan at 11:44 PM 2 comments: 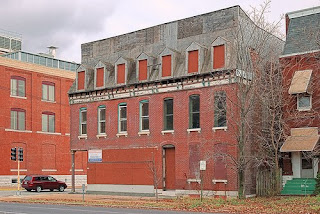 Thanks to Mark Abeln of Rome of the West for sending me this picture of a mansard hulk at Miami and Jefferson. The building to the left is Concordia Publishing.
This bad mansard lead has been sitting in my email in box since before Christmas. I had ambitious plans: I would go take a picture myself instead of pulling it off Mark's flickr account. I had even planned to look up the property owner and figure out why someone added MORE height to a mansard ceiling. But, 4 kids and no time. So this is all you get. I would love to hear anyone's theory of what the heck happened to this mansard. Was it a factory of some type that needed more head room on the third floor for machinery? Were there some really tall people living on the third floor?
About Mark's blog (click here): he takes stunning pictures of the interior and exterior of churches throughout the metropolitan area. In the city of St. Louis, the Catholic churches anchor every single city neighborhood and compose the visual landscape. Rome of the West lets us take a peak inside.
Posted by kristan at 7:54 PM 5 comments: