If you are my age (late 40's), Athens, GA means one thing.  Even more than the University of Georgia, Athens is the birthplace of REM* and the B-52's.  I remember visiting my grandparents in the early 1980's and seeing flyers for the band REM playing at the DePauw university auditorium in Indiana.  What was the REM?, I wondered.  A few months later, I had the EP Chronic Town and played Boxcars constantly (it made sense for a teen in Webster Groves- so many boxcars to see on the two rail tracks that cross WG).  By the late 1980's, REM exploded and I kind of lost interest.  "Anything after Fables is a sell-out," I said because I was cool like that.

Anyway, when my friend Richard moved to Athens, I thought REM's birthplace!  But, Richard also found this sweet and sad mansard.  Thanks Richard!

Footnote:  I interviewed a lovely man from Athens for a  family WW2 football project I was working on. He was charming and helpful.  He was a press assistant to a 508th AB officer who had a great memory of some historic WW2 occupation football game.  Anyway, he reminded me in his smooth accent that Athens was the home of REM, the B-52's and Widespread Panic, LOL. 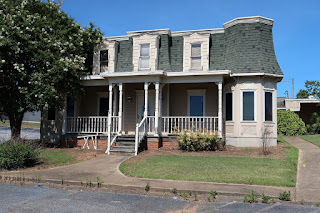 Posted by kristan at 9:32 AM No comments: 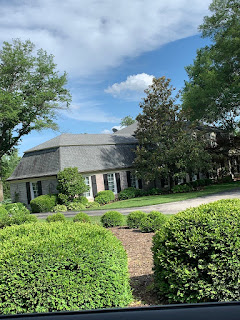 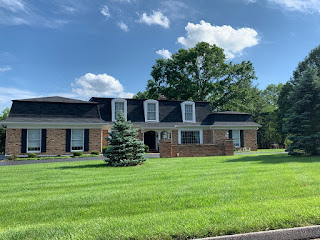 63124 is the zip code for St. Louis' wealthiest suburb.  Lots of pretty old houses.  I grew up on the wrong end of Litzinger Avenue over in Brentwood - 63144.  Litzinger has giant horse farm houses in the Ladue part, but once you pass the quarry, you're in Brentwood and the houses get smaller as you head east.

Posted by kristan at 8:43 PM No comments: 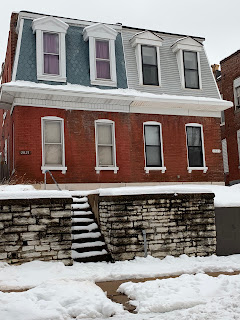 When you just can't decide on one kind of material for the whole mansard.  On Nebraska Avenue.  What I was going when I saw this one:  heading to QuikTrip for gas.  Where I was coming from:  dropped G. off at a friend's house, then stopped at Ruler for 5 gallons of skim milk, because that's how we roll.  Where I went next:  home to take on an enormous mess in the laundry room full of sledding-wet clothes.