I serve on a board of a needlepoint store operated by the alum club of my college sorority.  Don't like sororities?  Think needlepoint belts are silly?  Deal with it.  The store is entirely volunteer run and profits are donated yearly to deserving charities.

We had a board meeting recently and I really wasn't in the mood to coordinate the logistics of making it to the meeting with my husband out of town.  But I made it and imagine my surprise to see this structure on the property of the hostess of the party.

This description from the city of Kirkwood says I better than I can: 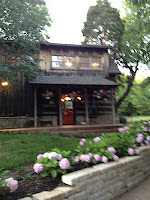 Henry Hoch purchased 40 acres along Sugar Creek from the U.S. Government in 1837 for a farmstead which grew to include a dogtrot cabin, farmhouse, barn and stone smoke house. The property ran up the side of a steep hill and was heavily wooded. First he built the dogtrot cabin with space between the two end rooms for a horse and cow. When a barn was built a year or two later, the cabin's middle room was converted to a kitchen.


In 1870, the Hoch family hired Kossuth Strohm, a carpenter who lived across Sugar Creek, to build a two-story frame house. During the years, family quarried limestone on their property for the foundations of early Kirkwood buildings. Philip and Mary Hallet Gronemeyer, nationally recognized artists, made this farmstead their home for many years. The property has been subdivided and ten new houses have been built. The cabin was carefully dismantled and reassembled elsewhere. The barn and stone smoke house remain


The way I understand it, the barn sat between two new houses.  The hostess of the party bought it from her neighbor to the east, who I think are the Gronemeyer folks or their descendants.  Leave it to the girl from Soulard to show up at a party and talk about old houses with the hostess' husband.

Posted by kristan at 8:23 PM No comments:

Wrapping up the week 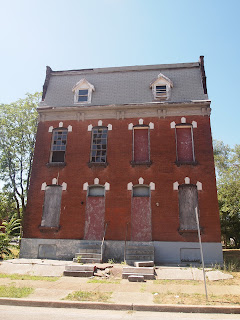 Audrey had a girl scout project in the Old North community garden this morning.  Going on at the same time was the lively Old North 14th Street Market with produce, people and music.  Great to see Old North continuing its upward momentum.  I am confident that in 10-15 years we'll talk of Old North just as we talk now of Soulard, Lafayette Square and Benton Park.

That's why these bad mansards are so sad.  Houses just like them are lovingly rehabbed all over the near south side.  But Old North is only where Soulard and Lafayette Square were in the 1980's. 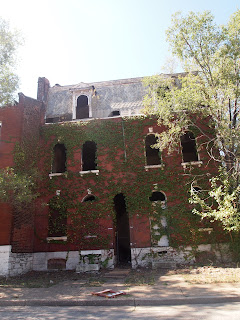 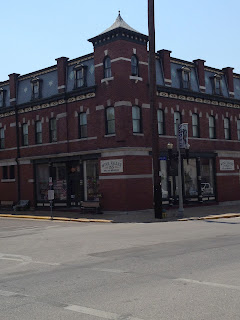 In court in Gasconade county when I found this lovely.  Wish I had taken my good camera with me.  This building is in Hermann, Missouri.  Love the tile work and the detail. 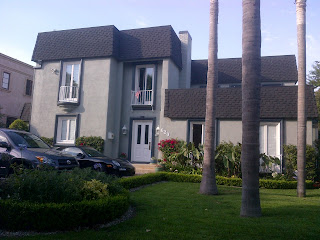 I do really like the rounded boxwood hedge.  It seems to take the edge off the sharp points of the mansard roof.

Thanks to my friend Emily who snapped this picture on a recent business trip. She is the president of her family's electrical contracting business (the one with the orange trucks with the lightening bolt) and she is always going to fabulous locations to attend interesting conventions.  She also hold the distinction of being one of the first mom friends I made at school back in 2004 when our daughters started in the Montessori pre-school together.  Thanks Emily!
Posted by kristan at 9:44 PM No comments: 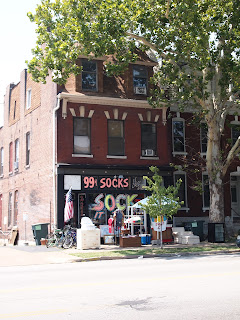 That's right.  Sock Mansard.  Located on Jefferson Avenue just minutes from Interstate 44, St. Louis' newest 99 cent sock store offers so much more than socks.  You can also get a sno cone or a used piece of furniture or a lawnmower or a bicycle.  In other words, "Sock it to me" sells junk it found in the alley or stolen stuff hotter than a St. Louis July day.  Who knows if the socks are legit; I guess they could be if you got a great deal on a truck full of socks.  I just have a hard time believing this is a legitimate business model and that there could be profits on the sale of 99 cent socks.  There are so many good businesses have a hard time surviving and yet I am to believe one selling 99 cent socks is still going strong?  Probably a front for the stolen goods or fluorescent paint or sno cone fraud or something else.

Sock it to Me definitely gets the badmansard award for sketchiest mansard.

You know who is not sketchy but super cute?  Mimi.  She turned 4 this weekend which mandated a Saturday family party followed today by a kid party at the children's garden in the Botanical Garden.  Great party place, especially when so many of the kids live near the garden anyway.  We went early before the heat set in and the crowds showed up.  They ran around, had fun, stayed cool in the water and put on a puppet show.  And who knew, but the town square in the children's garden is called Mimi's.  It was meant to be. 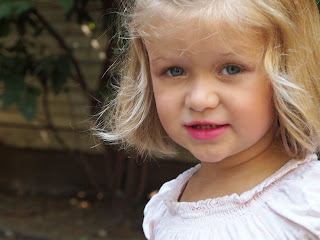 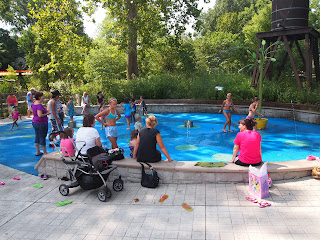 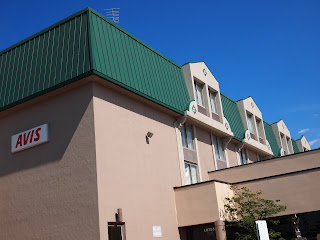 Can you name this faux mansard? Hint: it's in the county and a hotel.  It may now be part of a national chain, but it's always been known to locals as its former identity before it was part of the chain.

I spend a lot of time near this hotel because my children's pediatrician is nearby.  So far this summer we've had strep throat in two different kids and another with pneumonia.  I thought summer was supposed to be illness free?
Posted by kristan at 7:30 AM 3 comments: