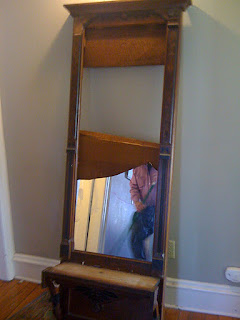 I was planning a really, really ugly bad mansard post today. It didn't happen. This antique pier mirror messed everything up. My husband bought it for me from Sambeau's in the Central West End for our one year anniversary in 1999. We brought it from our first house in Lafayette Square to this house and bolted it to the wall in 2002. I never thought another thing about it.
Until this morning when it came crashing down on top of our 3 1/2 year old Mimi. And there was blood, glass, shattered wood and teeth everywhere. She had a few scrapes and three baby teeth got knocked out by the force of her face hitting the floor (fortunately an area rug softened the blow). Despite the injury and damage, I felt incredibly lucky. That thing could have killed her. It's heavy wood and the glass is about 1/4 inch thick.
Our good friend is a dentist and will check her out tomorrow. Fingers and eyes crossed everything is ok.
So, to all you moms raising kids in old houses, I have advice for you. The dangers of keeping little ones safe in a house 100+ years old are different than in a newer house. For sure newer houses have problems too. But older houses have some inherent risks to kids.

I will argue that an older home is 100% better for raising kids than a newer home. That said, let's all do a safety check and make sure the accidents happen less frequently.
Posted by kristan at 10:19 PM 1 comment:

Labels: raising kids in the city 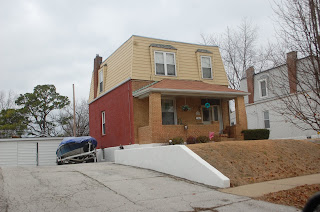 Boats always look so out of place in the city. It's pretty clear you aren't going boating anywhere on your property if you live in the city of St. Louis.
You know what also looks ridiculous on this place? The porch!! I can't tell whether the roof or the porch was the add-on to this house. Given the neighbor house with the mansard and the brick color of the porch, I am going with porch addition.
House is somewhere near Ivanhoe and McCune. I found it while I was looking for the holy grail of south city bad mansards. That will be featured on Christmas.

Where would you move?

One time at a dinner party 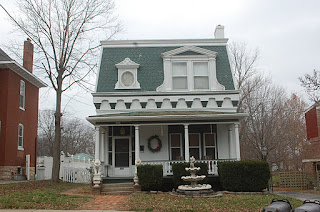 we played a game*. Each guest had to pick 5 cities to be transferred to. It made for interesting conversation. We learned where other people had lived and what was important to them in selecting a new city. I picked Minneapolis, Chicago, Denver, Kansas City and maybe New York or Austin. My reasoning was having many friends and families in those cities, decent culture, and school options .
There is a spin on the big city transfer game. It's the small town Missouri game. Pick a small town to live in if you couldn't liv
e in St. Louis. Hands down my pick is cute Washington, Missouri. About 50 miles down interstate 44 to the west of St. Louis on the Missouri River, Washington was founded by Germans features great houses, big churches, a cute downtown and neat restaurants and shops. Washington is a combination of two places I already have lived- the small town feel of Webster Groves mixed with the big bricks, river and festival-centric nature of the City of St. Louis.
And this cutie-patootie mansard. Where would you live if you had to pick a big city or a small Missouri town?
**Beware my dinner parties. There will be a good chance you will play a hypothetical game or a board game or a drinking game. 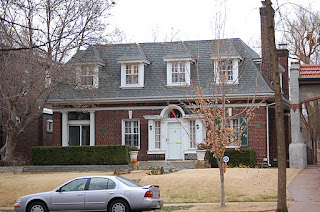 Isn't this Flora Place house cute? I found it in my mansard photo folder and I think I was 'saving it' for the holidays. I guess it is the right season to post it. I like how there is a pumpkin on the porch and a Christmas wreath on the door, just like my house.
Posted by kristan at 6:10 PM No comments:

I am working on some juicy bad mansard posts. Until I finish with those, I am presenting to you one of my favorite houses on Flora Place. It is somewhat plain compared to the larger mansions that surround it. 3816 Flora is where my grandmother grew up back in the 1930's and 1940's. A gorgeous and smart lady who matriculated from Roosevelt High School and later from Washington University.
She was Presbyterian and attended Tyler Place Church around the corner from this house. I, on the other hand, am Catholic and drive my kids over to school in her old neighborhood to attend St. Margaret of Scotland. I came across a family genealogy chart that showed her mother's family (the Starr's and Chester's) to be descendants of, wait for it, Queen Margaret of Scotland. Small world. 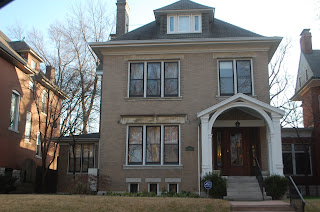 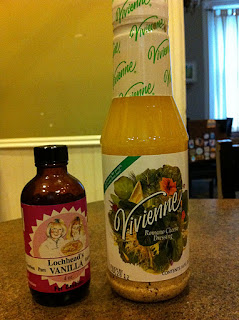 Two of my favorite St. Louis products, both available at Vincent's. I don't know the folks at Vivienne's, but the Lochhead vanilla people are friends. The women on the photo are my friend M's mother/sister in-laws. Love the Lochhead vanilla. It's manufactured out in Fenton but the consumer bottles are packaged here in Soulard.
Posted by kristan at 12:04 AM No comments: