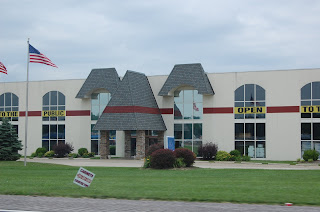 I don't know what this facilite procures besides a grande dosage de bad mansard.  Off Highway 70 near O"fallon.
Posted by kristan at 9:57 AM No comments: 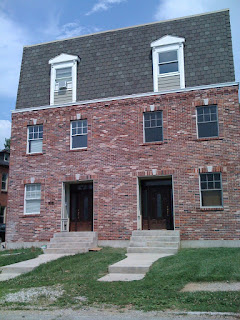 For the love of Dieu, how does this monstrosity share a zip code with Lafayette Square and Soulard?  This is new construction- as in someone planned this 'design' recently.
Ironic, isn't it?  The strict historical code around here prohibits me from using certain windows or having an air conditioner visible from the street, yet someone at City Hall said, "oh, yeah, sure, build this house."  I am pretty sure that is an AC unit hanging out of the window.  Also wrong:  Handrails?  Brick veneer?  Front door?  Foundation?
If memory serves (I sound like the chairman in Iron Chef Japan), this yahoos that built this are doing other 'projects' in the area.
Posted by kristan at 10:24 PM 3 comments: 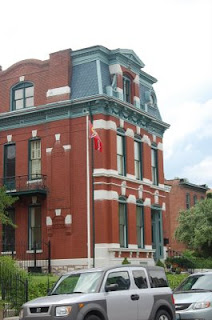 My husband was complaining that a mansard this lovely has no place in badmansard.  I disagree with John (frequently, I might add, but about lots of other things like laundry, politics and technology).  He was actually mad I made him stop the car so I could take a picture.  John almost left me there, but that would have been ok because we live about 100 yards from this house.
A perfect mansard like this gives us proper perspective.  This is on 12th Street in Soulard near the Anheuser-Busch tour center.  I believe this is a beer baron house.
Posted by kristan at 12:27 AM 1 comment: 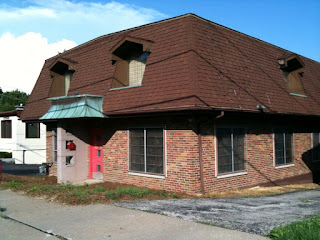 Bonjour mes amies.  Where to start criticizing this Big Bend delight?
We used John's new 3GS to take the picture.  It's a great phone with a video camera (!) - easy to use and takes nice video.  Look forward to some future bad mansard video posts.
Posted by kristan at 11:27 PM No comments: 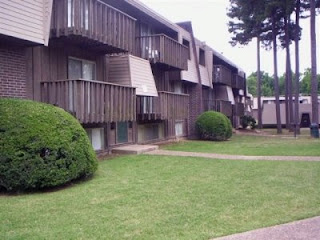 Thanks to reader LisaS who submitted this bad mansard.  As a child she recalls spending time in this Little Rock apartment complex.  LisaS remembers playing hide and seek around the apartments and rec center.  Is it a coincidence that Lisa became an architect?  I think not.
Please draw your eye to the mansard-pod design in the background.  The rec center?  A utility shed?  It looks like a litter box.
With this submission, Badmansard has exposed the fugliness of poorly designed mansards in four states:  Arkansas, Missouri, Illinois, California.
Posted by kristan at 10:00 PM 2 comments: 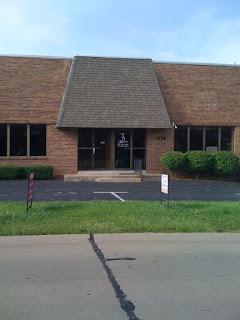 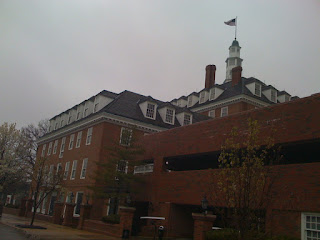 Here's a mansard in Clayton.  Sorry for the poor angle.  This mansard is by my accountant's office.  When I leave the accountant I tend to be dizzy, emotional and nauseated and thus my camera skills are subpar.
I think this mansard is neither bad nor good.  I deem it a neutral mansard.
Posted by kristan at 7:19 PM No comments: 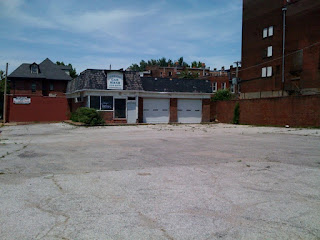 Welcome to Lafayette Square!  Here is a bad Mansard on Jefferson #2 at Lafayette and Jefferson which I would imagine the neighbors don't like very much.  I believe, but don't quote me, that this was to be the site of the Mary One Johnson commercial retail development. 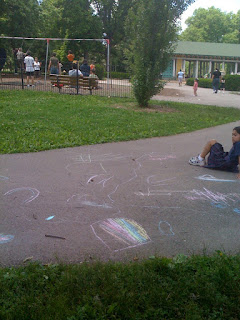 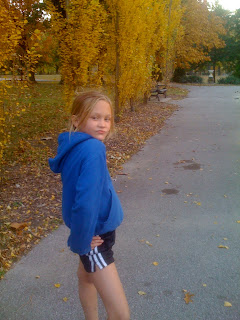 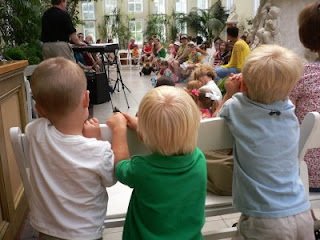 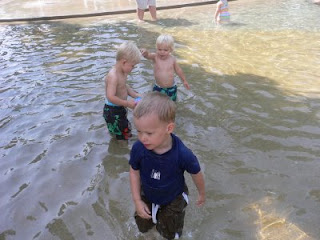 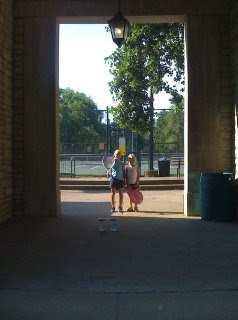 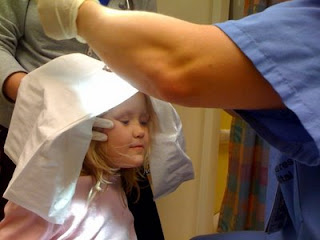 You know those green gates that keep cars off some of the streets? Don't run under one because you may bang your head like Audrey here and need stitches in your scalp. 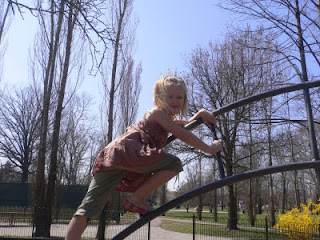 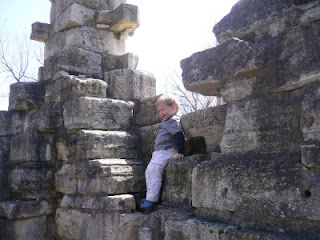 Gus on ruins about a year ago. 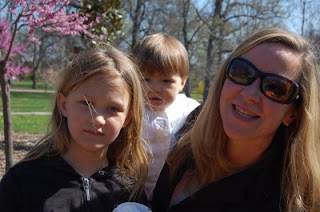 Kay, Mimi and I at St. Margaret Easter egg hunt.
Stupid to even debate which is better- how lucky are St. Louis is to have these two wonderful parks. Actually, St. Louis has many wonderful parks anchoring its neighborhoods. John and I first lived in an apartment at 4504 Laclede at the intersection of Taylor and Laclede. Forest Park was our pre-child playground. I'd start the day with a 5-10 mile run (!). Amy Z. and I would ice skate on Sunday nights. Beer fests, softball, picnics, Boathouse happy hours (even before it was rehabbed), Jewel Box weddings- all were in our backyard. Now that I think of it, in high school John and I would drink vodka and Mountain Dew in Forest Park on Art Hill, so our Forest Park days go way back.
We bought our first house about 10 years ago on Mississippi in Lafayette Square. Lafayette Park is about 1/50th of the size of Forest Park. Even though it is much smaller, it felt more 'ours.' We worked in the rock garden with neighbor Rebecca who refused to use Round Up (she still won't- I do, albeit sparingly). I ran the .9 miles around the park numerous times to eek out a decent run. More drinking- sometimes at the summer concerts, but mostly just cocktails and walking the dogs. RIP Bear, our 110 pound dog that pulled me like a water-skier over Lafayette Park's pebbly roads.
I'll always remember my friend Colleen R., whom I did not know at the time, pulling up and asking, "Hey, were moving here from Kansas City- are there any kids that live in this neighborhood?" To which I replied that I sure did hope so because I was pregnant with one. When Kay was born we pushed her through the park and met up with the handful of other moms at the playground. Colleen still lives in the same house she bought 10 years ago and is a hostess supreme and is one of my favorite people. By the time I was pregnant with Audrey, the Lafayette Square house was on the market and we were on our way to Soulard.
Soulard has no single central park- there are three smaller parks- Market Park, Pontiac Park, and teenie-tiny Aboussie Park on 13th. I go to all of them. Kids love exploring Aboussie Park on evening walks. The Pontiac playground and nearby garden are newly renovated and worth the trip. When I run, I usually loop the brewery a few times and do a few loops of hilly roller-coaster park, Lyon Park.
We're getting to the end and it is this: Tower Grove Park is my grown up park. Originally plotted along with the Missouri Botanical Garden, it is a privately maintained park available to the public. The groundskeepers are so considerate that they turn off their equipment when you walk by so as not to disturb you.
We're in TGP at least once a week: School field trips, tennis lessons, school picnics, soccer, t-ball, Easter egg hunts, family bike rides, brunch at Cafe Madeleine at Piper Palm house. The beauty of TGP is that while I'm doing my mommy thing in TGP, other folks are happily doing their things. Old dudes resting on benches. Birdwatchers. A gay kickball league. Bosnian and Mexican kids playing soccer. Weekend Farmers Market. Urban family reunions. Good times for all- just the way Henry Shaw must have hoped for.
Rome of the West has a lovely post on TGP and its history. Click here.
Posted by kristan at 7:47 AM 5 comments: 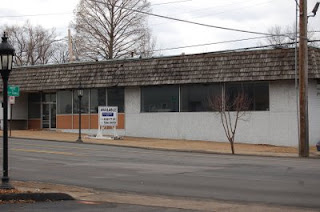 Big Bend Road in Maplewood.  This is a shab-sard.  The mansard shingles never age very well.   Kind of like girls who smoke and go to tanning beds.
Posted by kristan at 8:46 PM 1 comment: