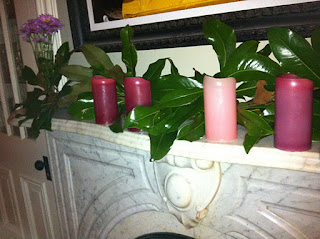 Here is my deconstructed Advent wreath which is neither in a circular wreath form nor does it technically have the correct variety of evergreens. Nonetheless, it's how I do Advent. I have Southern magnolia coming out of my ears.
I have these ridiculously happy and abundant Bracken Beauties in our front yard*. Every year I whack off branches to decorate the mantles and make wreaths for the doors. Do you have any idea how expensive magnolia wreaths and swags are at even wholesale suppliers like Baisch and Skinner? $50 a pop. Crazy.
Candles are from Missouri Candle Company. They smell like baby powder.
*not sure anyone in the city has a proper front yard. We have a nice tree lawn along the street and a small courtyard where the Southern Magnolia thrive. They usually are only happy to a zone 6 (St. Louis is a 5), but a Bracken Beauty does very well here if it is shielded from the NW wind.
Posted by kristan at 7:17 PM No comments: 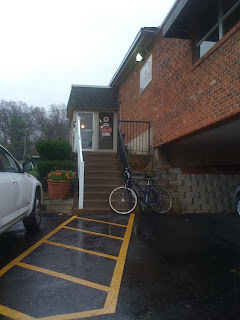 A little slice of bad mansard on a building I visit a lot- Soccerdome. Not much mansard to see here folks. Just a mansard vestibule.
Of note, it never seems like we use that entrance unless there's a tournament. And when there is a tournament, watch out because it always means you have to pay a couple of bucks in cash and I never seem to have cash on hand.
Posted by kristan at 11:45 PM No comments: 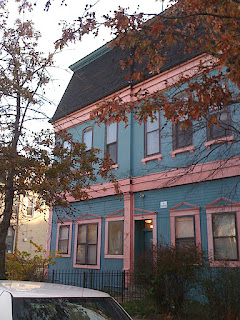 The stretch of Jefferson south of 44 to Gravois has some very bad mansards. This one had eluded me for a long time. Not sure why; it's either at a strange spot on Jefferson or maybe it's the trees. Strange that such a garish thing could be so hard to see.

This past weekend was a social whirlwind. I know, I know. I act like every weekend, or every day, is a whirlwind. I had 17 3rd graders over for the Mother of All Brownie Meetings. I had a friend in from out of town for a visit to City Museum. Went to a wedding and reception. Had some neighbors over for brunch where I made the Mother of All Breakfast Meats, the Sausage Ring of Saturated Fat. Also dropped the ball a few times. Forgot that daughter Audrey was coming home from dance at 3. No one home. Oops. Also the Brownie meeting was intense. I was dead set on wrapping up six try its we've been working on since last spring. Those vests needed some flair. (Office Space reference; click here).

I also had a birthday and our anniversary this past weekend. All I wanted for a gift was one hour to go for a long run. Saturday morning I took a new route and ran down Jefferson which finally gave me the chance to get a crappy iphone picture of this tar paper, pepto pink and wannabe-but-not-even-close-French blue. Perhaps it is the Mother of the Jeffersonian Bad Mansards. (click the Jefferson tag for the others).
Posted by kristan at 6:43 AM 1 comment:

So sorry it's been 20 days since last I posted. And I don't even have any fresh material . Only this really bad mansard local realtor Ted Wight found on the St. Louis South Side. Click here for his post. Are you reading Ted's blog? If not, you should. He has a keen eye for stylish homes (especially mid century moderns) and nice gardens. I love any blog written by a man who loves European Hornbeam hedges.
Also check out Ted's bad realtor photography. It's like the Cake Wrecks of real estate listings.
I doubt anyone wants to know where I've been for the last 20 days. But I'll gloss over some highlights: birthdays, halloweens, trip to Mizzou, kid with whooping cough (yes, in this day and age even with immunizations), some parties, 7 volleyball games, 2 basketball games and a soccer game, a Brownie meeting tomorrow and the neighbors over for brunch on Sunday.
Posted by kristan at 11:54 PM No comments: