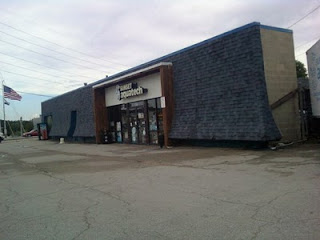 And legendary this mansard is. (sorry if légende is masculine not feminine).
I saw a picture of this mansard years ago on a local St. Louis architecture/preservation page-- BELT? Commenters on that blog labeled this Cousin It. Perhaps the memory of this tres bad mansard stayed in my subconscious and years later motivated me to start badmansard. Am I right that this is a cinder block rectangle with a shingled mansard as tall as the building itself but for 8 inches on the bottom which might house Aquatech trolls?
If I had a crown of bad mansards, there would be four jewels: this one, the Hannibal Mullet mansard, Chicago drive-thru banque (more trolls live in its drive through roof/see window) and one more, a mansard that eludes me, the Belleville, IL mansard-a-mansard apartment building. The Bellevegas mansard is like the grail of mansards- one day I shall make the journey to Belleville to seek it in the name of bad architecture glory.
Speaking of art and architecture, thanks to my friend D. who sent me this picture. D. teaches art/architecture at Webster U. When I drive around town pointing a camera at houses and taking pictures, I worry I may get stopped or questioned. Instead of giving the "I write a blog" speech, I am going to lie and say I am in D's class and writing a paper on the mansard style.
Posted by kristan at 10:40 PM 4 comments: 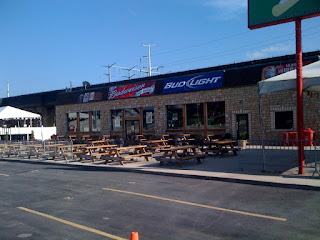 Attention Hoosiers, Hipsters, Cardinals Party People. Kilroys, just south of Busch stadium, is a bad mansard. I don't know who patronizes Kilroys and thus my blanket greeting.
The mansard roof also blends into highway 55 in the background and one cannot even really tell where the parking lot starts and patio seating begins.
Posted by kristan at 11:17 PM No comments:

Father Day is coming up. Here are three

books you should buy because they were written by friends of badmansard.
The first is the New Dad A=Z by good friend Dan Consiglio with whom John and I go way back - as in skipping Shakespeare at the Rep in Webster to go get drunk at Dan's house on California, circa 1987. click here. New Dad is perfect for, obviously, new dads but also ANY dad- lots of "exactly!" moments. Dan lives in Chicago but loves the Cardinals, which brings us to our next livre.
Second book is by Post Dispatch sports write Derrick Goold. His son is in preschool with my own boy. Lots of talking about Star Wars (between the 4 year olds, not this book). How could a book of 100 Cardinals factoids NOT be perfect for Father's Day? click here
Third book isn't really for dads, but as long as we are talking about books by people I know, we should mention Mei-ling's book. Just came out in paperback. Mei-ling was adopted and tracked down her birth family in Taiwan/China after we left college while she was a reporter with the Post Dispatch. In case you need to know how I know Mei-ling, she was in my sorority and also in the Journalism School at Mizzou with me. click here
So there you go- buy all three books for around $30 and support some good people. Now that I've written of baseball, Webster High School and Dan Consiglio, I'm reminded of Don Mumm, baseball coach and reluctant gym teacher of the laziest group of 11th grade girls at WGHS. He'd get pissed because we wouldn't run, stretch, play or care. Totally awesomest friend in the world Maire Kennedy and I re-worked a Book of Love Song "I touch Roses" intor "I hate gym class." He'd yell "you girls!' but then stick his nose back in his baseball playbook and ignore us. Good times. I've included a picture of the gals from that gym class outside the WGHS Roberts Gym entrance. I'm the bowl cut blond in the middle. Picture from 1987 or 1988.
are you too young to know of Book of Love? here you go - click here
Posted by kristan at 7:06 PM 1 comment: 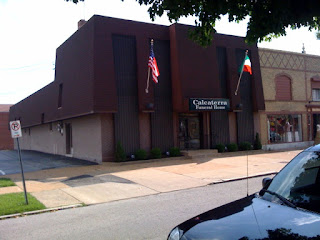 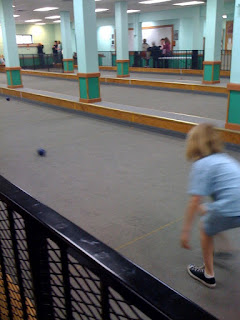 Here's another Italian bad mansard on the Hill, un maison d'enterrement !
Hopefully my criticism of the Calcaterra funeral home's roof doesn't get me banned from DiGregorio or get my kid kicked out of the Italian American youth Bocce league. Yep, Bocce. Are you wondering whether my husband or I are Italian and are passing down a family tradition to our daughter? Well, none of that. Audrey plays with a friend and she really likes it. Bocce requires only strategy and the ability to toss a ball with a certain momentum. A group of 7 year old Bocce players can take on kids age 4 or 10 and it can be a pretty well-matched game. And it's a free league.
Posted by kristan at 1:10 AM No comments: